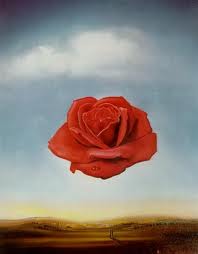 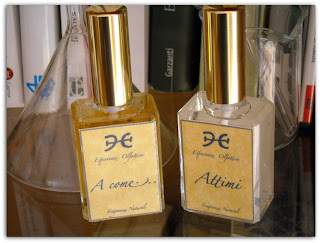 It's too long time that I miss my loved ones "posts" odors; this is the right opportunity to introduce something really special and outside the lines. I want to talk about a little (for now) reality that born by fiery passion, wit, talent and professionalism.

"Esperienze Olfattive", a brand that starts from a  blog,
a blog about the smells and flavors on an informed basis, with passion and professionalism; behind all this there is someone that really know very well the aromatic world; he is Prof. Roberto Dario.
I felt the creations of this passionate alchemist, and it is absolutely necessary that some delights must to be shared with other fans of perfumes like me.

Let's start with a series of five fragrances of which is the undisputed protagonist my beloved lavender; the first "Acqua di Lavanda", fabulous, simple and gently zesty with that light touch of spice of the lavender itself, I would say only spikes of lavender, light and evanescent leaves on your skin a delicious and aromatic powdered whisper!
The second "Lavanda Fizz", where the lavender is illuminated by notes of bergamot and amplified by a neroli heart that sustains and accompanies it never overpower the freshness of summer.
The third, "Fresca Lavanda", where lavender and mint come together in perfect mix by the "awakening"effect, I also feel herbaceous heart notes that do not identify, but there must also be noted that Mr. Dario uses not only natural essences, but also self-produced aromatic tinctures, for which no use going to investigate .... well, it's in fact an extraordinary fragrance, very persistent, fresh, crisp, juicy (mouth watering .... just enough that maybe I should even taste it?), Regenerating.
The fourth "Spicy Lavender", lavender and ... a hint of black pepper, the sweetness with a touch of coriander, maybe a little int of lemongrass to give a note in the heart of Citrus, a modern fragrance, young and sensual that plucking and stimulates, perhaps feeling it might make you come up with a known fragrance by Lorenzo Villoresi, but I do not want to compare ....... live and the emotions that I experienced with "Esperienze Olfattive" are worthy of mention.
The fifth, "Lavanda d'Oriente", the most complex, where the lavender approaches, without ever losing its peculiarities of vivacity and freshness that are deeply rooted, in resins and precious woods, we feel honeyed notes in the heart, followed by a bitterness, myrrh, cistus, or perhaps, nutmeg ..... and all that is needed to create a magical mix that evokes silks in red, black and gold, and certainly a wonderful fragrance for a magical summer evening.
At  this series, where the lavender fragrance is the queen, now being added on two other beautiful creatures, a bright, airy, graceful "Attimi", that smells of summer fields caressed by the wind, freesias (unfortunately is not possible to extract essence from freesias, as also from the lily of the valley, but here as though by magic, is recreated) and cut grass; a gentle floral fragrance, very feminine..............Roberto, I can not hold .. .. You're a genius, congratulations!! The other more shadowy,
introspective, but ranges over infinite horizons and intangible assets, "A come...", an oriental floral and delicately powdered, opens with fruity and slightly floral notes evolved into a complex texture and honeyed notes of amber that lying down making it rich and valuable .... I can imagine it on a woman with a dark complexion, raven hair and the deep eyes.
This is a reality that I found on the web, there are not only big brands that jostle at the sound of spots (which in fact we pay also for 60% of the cost of the product), but even these niches ... perhaps no longer even be identified as the right "niche", but rather as a small "kiosks" in the country where gather in ecstasy, which excels the quality of ingredients and the real passion and mastery to mixing them in properly to give pleasure to our senses.
Bravò at "Esperienze Olfattive" chapeau to
Roberto Dario.
Mauro
Pubblicato da / Published by Unknown

wonderful post.Never knew this, regards for letting me know.

Mine are only reviews, on my blog does not sell anything.
For the next please write in english.

Can I just say what a relief to find someone who actually knows what theyre talking about on the internet. You definitely know how to bring an issue to light and make it important. More people need to read this and understand this side of the story. I cant believe youre not more popular because you definitely have the gift.